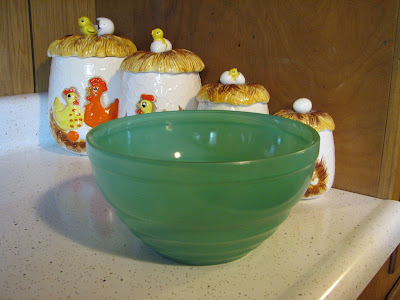 This bowl is unmarked, but I know it to be Jeannette by a picture I saved from heaven-only-knows where, on my computer stash of dish images and info. There is an Anchor Hocking set using the exact same colors fired on clear glass that is almost always a source of confusion for its similarities.

I believe these bowls pre-date opal Pyrex, and that the shapes and were colors chosen to compete more with popular, colorful pottery items of the time, like vintage Fiesta.

Here it is nesting with my large red bowl I found very recently as well: 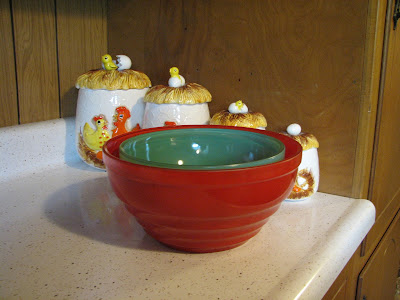 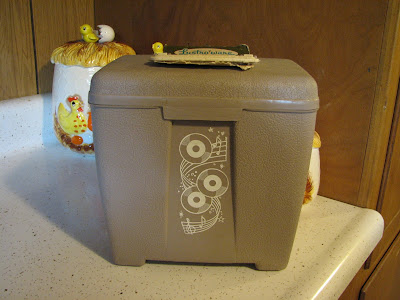 And here's another oddity I didn't know existed - a Lustro ware 45 record box. 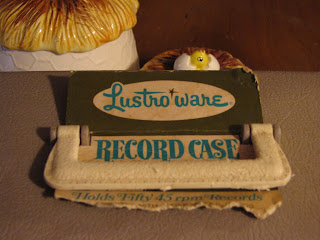 I also discovered while researching this guy that Lustro ware also made a mailbox. Who'da thunk it?

At some point, many Lustro ware items were banned by the Environmental Protection Agency, under the Toxic Substances Control Act first passed by Congress in 1976.

Despite this knowledge, I keep bread items in a vintage red Lustro ware bread box. Living dangerously, right? At this point, I've become so cynical about what's safe and what's not that I just assume whatever we are told now will be corrected 20 years later, so I might as well chose my toxicants based on beauty and usability and leave it to God for the rest.

And a few more cheap and cheerful odds and ends: 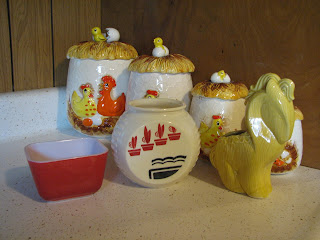 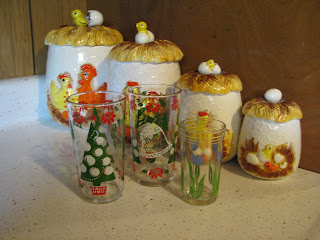 Two more Hazel Atlas holiday glasses for my collection, and another little tulip glass, which oddly was my second one in as many days. The other was already washed up and in use in my bathroom so it didn't make the photography session, lol. 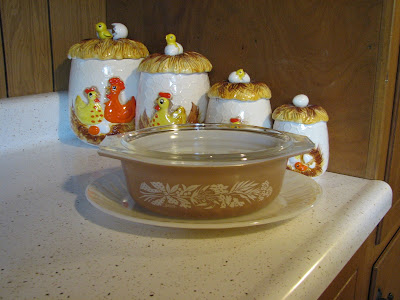 And I managed to finally satisfy my hunch/belief that this casserole is indeed a darker color than Sandalwood. 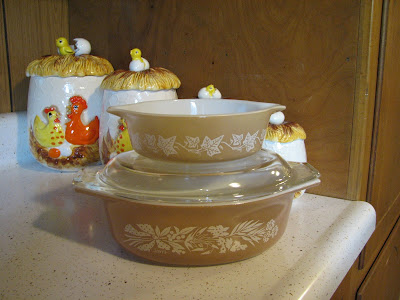 But not by much. I'd say it's halfway between Sandalwood and the lighter Caramel shade in Woodland. Which makes sense, since Spices was produced at the same time as Woodland, in the last days (*sniff*) of opal Pyrex.

And finally, I picked up this rack for 5 dollars. I had the idea a while back to use some of my refrigerator dish hoard to relocate and house my makeup.

I don't have a whole lot in the makeup department. My sister-in-law has gotten into makeup with a fervor  - (I guess you could say she's the same way about makeup right now as I've been about Pyrex). And it's somewhat rubbed off on me.

I've stepped foot in Sephora and Ulta a few times this year. I've bought 4 whole things that have set me back a hundred bucks (ouch!) and have watched the frenzy now of the must have palettes/highlights enough times now to feel like I have some idea of what's up, but also know that I absolutely cannot afford much of any of it unless I win the lotto.

My bad joke on the whole thing is: Instead of a Kat Von D, I'm like a Dollar Von Tree.

(Hey, at least the Dollar Tree has some cool Wet N Wild things from time to time, so I'm not entirely out of luck.)


I also think that on some level, the Pyrex popularity surge of the last couple of years has left a little hole in my happiness that I think I'm looking around a bit to fill with something else. I don't know that makeup is it, but it certainly can take up the money and time if you let it.

I just wish I could channel this need into something cheap and useful, like learning piano or Spanish or American Sign Language. Right this minute all I can seem to youtube are horrible makeup tutorials. lol.


Anyways, that's all for now!

Hope you're out finding stuff that is just the Cat's Pajamas!

Check out my gardening blog